Heather: You know how we love twins - especially ones who are the least bit creepy or more! The Luteces are our favorite part of BioShock Infinite and we knew we'd have to try to make their outfits somehow. The jackets, shirts, vests and pants/skirt are all modified thrift store finds and these are the first lace-front wigs we had ever worn. There are still a few fixes we want to make to these outfits but we had a lot of fun putting them (and all the props!) together. 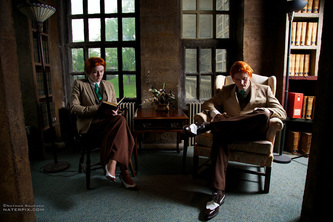 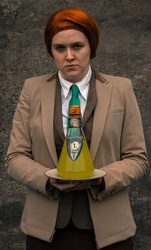 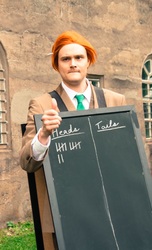 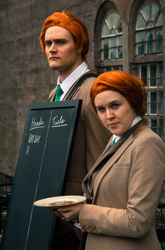 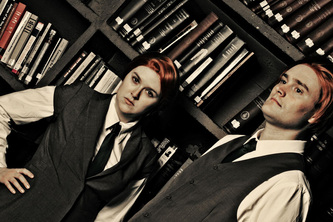 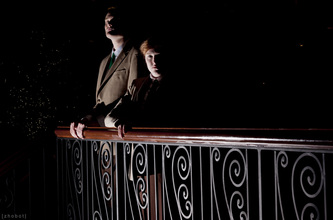 Nate: It was an exciting time to be going to Dragon*Con.  Irrational Games was going to show up at the Georgia Aquarium for an official BioShock photoshoot!  Holy Moses!  Just about everything was obtained from a thrift store (which are always goldmines of cosplay awesomeness).  Heather modified the buttons on the front of the jacket to make it double breasted as true to Ryan's jacket in the game.  The mustache was obtained for a few measly dollars off of ebay.  The adhesive material (aka burning gum of spirit oh god) was provided by Aphy.  Thanks for melting my face! D;  It was most definitely worth it though to have my picture taken by Irrational Games, and in a realm of pure aquatic awesomeocity no less.  Yep, that's a word now and I'm stickin' to it. 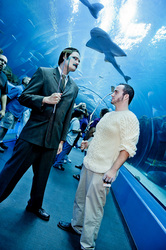 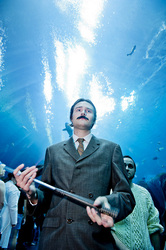 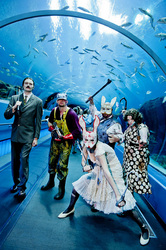 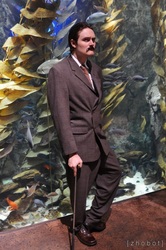 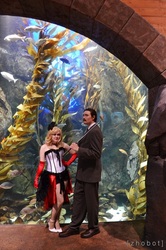 Heather: There was an awesome plot brewing for Dragon*Con 2011 – apparently at Dragon*Con’s usual night at the Georgia Aquarium there was going to be a giant BioShock gathering! We had friends plotting some splicer costumes as well as a friend who was coming as a Big Daddy and we thought we’d fill out the group with some of the human characters from the world of Rapture. While Nate went with Andrew Ryan, I went with Jasmine Jolene. I knew it would be hot (end of August/beginning of September in Atlanta, GA!) and I’m a sucker for taking outfits you don’t get much official material of and expanding on them. I’ve also always really been intrigued with the story behind her, Andrew, Jack and Frank Fontaine (and was really excited to learn about it in the BioShock novel, Rapture!).

I took inspiration from the poster of Jasmine that was plastered around Fort Frolic as well as some of the fanart out there (especially this beauty) and meshed it all into one outfit using the main colors you see associated with her – black, white and red. As crazy as a time it was getting to the aquarium (the buses weren’t showing up to take anyone, Nate and I ended up in a cab with a golf club, a fake moustache and this outfit, it was an adventure!), we were really glad we all went because we met some great people and got BioShock Infinite swag from Irrational Games who had showed up to take photos of the shoot! There were some really rad costumes there!

Those pointy heels hurt my feet after some time that night so I ended up looking like this: 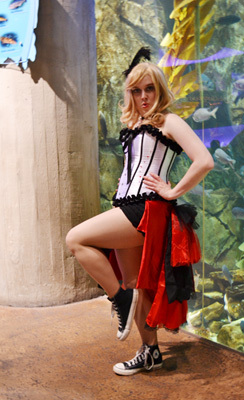 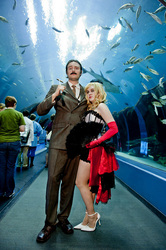 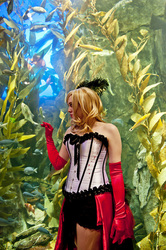 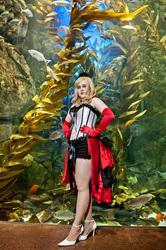 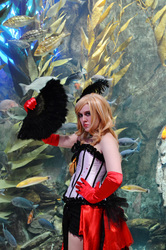 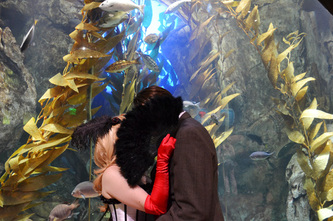 Heather: Dragon*Con 2009 was the first year D*C was partnering with the Georgia Aquarium for a special convention attendee night so Aphy and I thought WHAT COSTUMES WOULD FIT BETTER IN THE AQUARIUM THAN BIOSHOCK? NONE. And like magic, Tenenbaum and Julie Langford costumes were whipped up! I actually found all these pieces at a thrift store or on Ebay and modified them to fit Tenenbaum's character image somewhat - since there wasn't much to go on I had a little bit of wiggle room. Aphy made the Fontaine Futuristics badge for me (thank you, Ash! :D) and her and I had a super nerdy time talking BioShock while we were wandering around. Thanks to Emily also for fixing up my hair! This was also when Tenenbaum's name was switched from Bridgette to Brigid. So I apologize for any slips anywhere this costume is listed since her name wasn't Brigid yet, haha! ;D 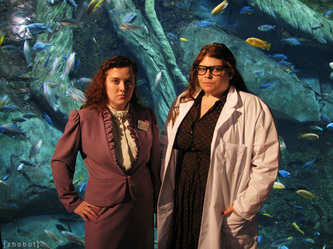 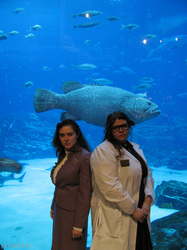 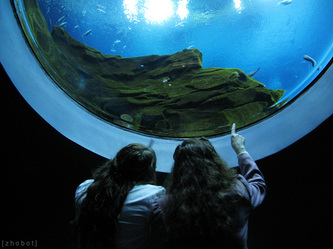 Heather: The first time I played BioShock I fell in love with it. Everything about the game is amazing and I thought the Little Sisters were adorable in a very (very, very, very) creepy sort of fashion. The fabric of the outfit was sort of thin, but that made it easy to rip and ruin, so I couldn't complain too much. The ADAM needle was an old gas pump, a spraypainted dowel, a cough medicine bottle and red corn syrup. One of my favorite things about this was when Nate and I started talking, one of the reasons he originally contacted me was because, "OMG IS THAT A PICTURE OF YOU COSPLAYING A LITTLE SISTER?" Ah, BioShock. Bringing people together. 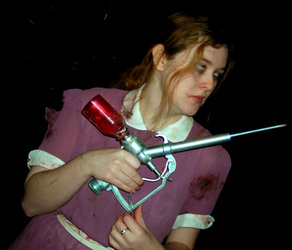 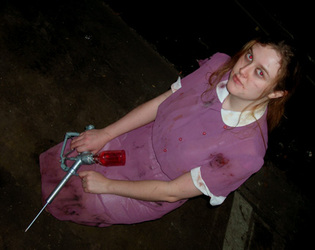 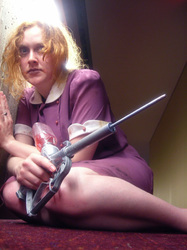