Nate: If there's one person who could kick your ass across the USA, its Saint's Row's boss.  Daring, crude, full of balls, or full of anything you want, really.  Saint's Row's boss is whoever you want him/her to be!  Despite the fact that I could have worn a cardigan, short-shorts, and knee high socks and made it work, we went for the semi-canon SR4 concept art for inspiration.  We met a lot of awesome people at the SR photoshoot and even got to skip the line for the SR4 preview footage!  Wait, wasn't this the second time we got in that line?  Either way boss is always a good time whether he's taking hostages or contemplating jewel theft. 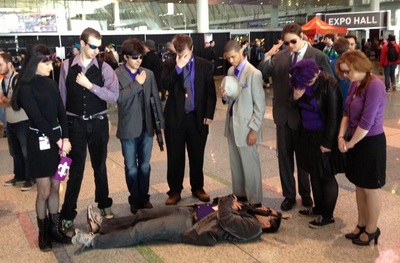 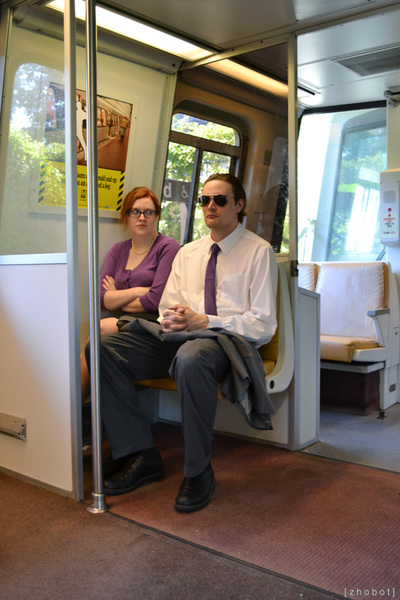 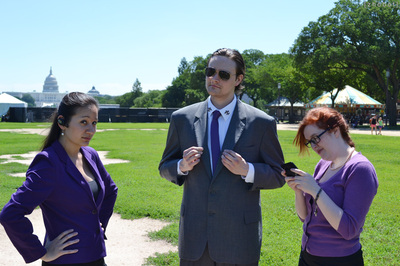 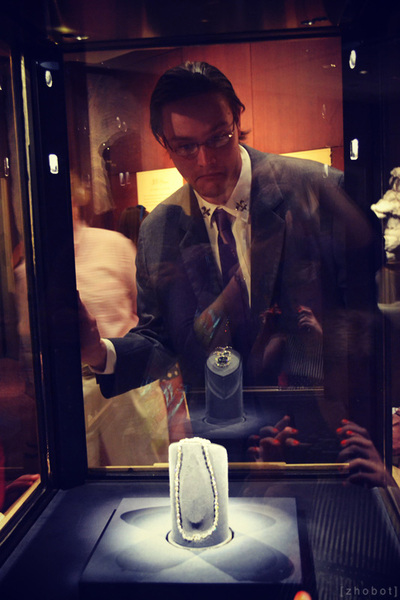 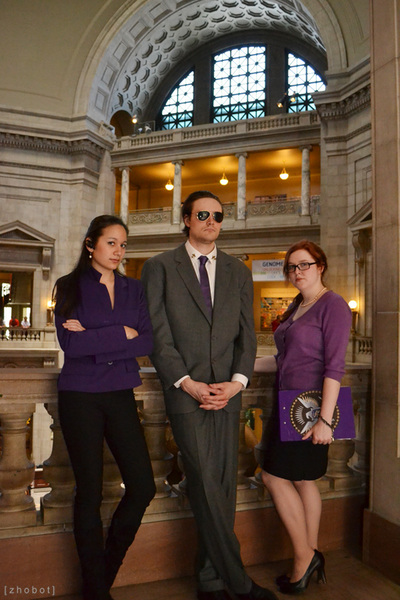 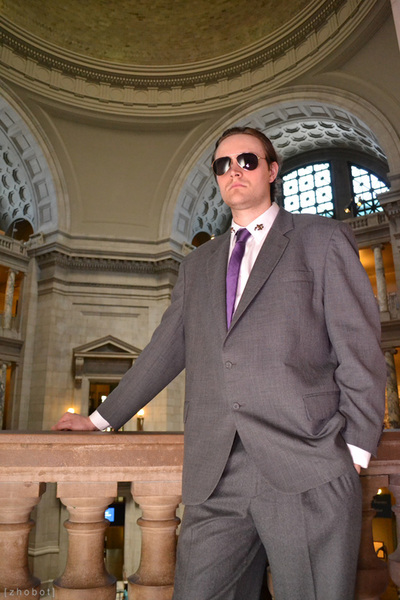 Heather: When a few of us over at Sew & Bro were talking about how cool colored lights and other related silliness, I mentioned Deckers costumes from Saints Row: The Third and it was all a roll into EL wire and LED lights from there! Nate already had his SR3 Matt Miller costume so he was set. Nate and Roger are saints (lololol pun intended except not cause DECKERS XD) and made me a Shock Hammer for my birthday, which was right before MAGFest 2014 when we first wore the costumes. Roger made the handle which can go from the compact version the Specialists wear on their back to the fully extended weapon and Nate worked on the details and wiring so that the handle, midsection and the actual tip of the hammer would light up. He also made it so that the blade could be down or out. I am so very much in love with that Shock Hammer and I spent most of this paragraph talking about it because ;____; <3...

Besides that, I stitched EL wire to my jacket and ironed the Deckers symbols on a red shirt. The lace was sewn to a thrifted skirt and the shinguards were made from scratch out of the same vinyl I used for Jaryn's original Street Style jacket (before I remade it - I knew that leftover vinyl would come in handy some day! :D). The skates are a pair I've had for many, many years and I painted them with spraypaints and acrylic paints before adding EL wire to those too. This has been a costume I've wanted to do for awhile and I had way too much fun at MAGFest in it! I wore a pair of boots there due to the fact that I didn't want to risk rollerblading in the Gaylord but we've gotten some shots with the skates as well! I'm working on some boots that look like their skates without the wheels/pink frame so the costume is more con friendly. So there may be more shots of this in the future!

Many thanks to Erin for the photos from the Gaylord (with boots!) and Lee of Dancing Squirrel Photography for the shots of us (where I have my skates :D)! 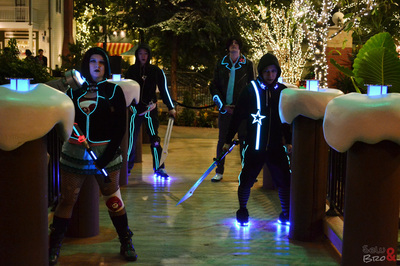 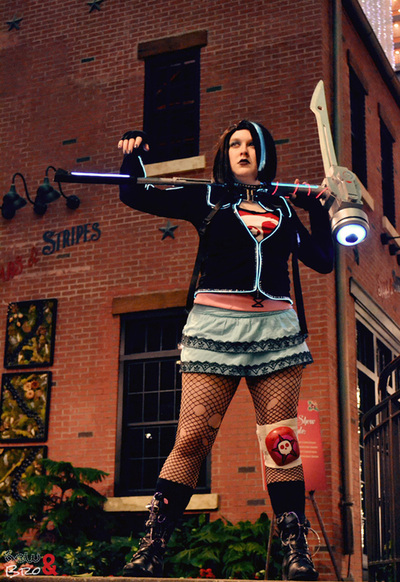 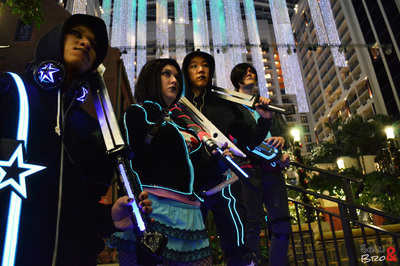 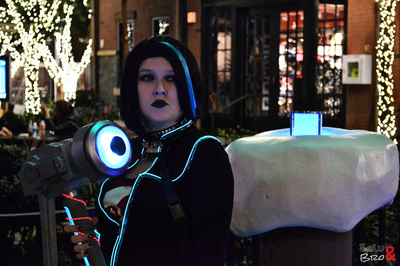 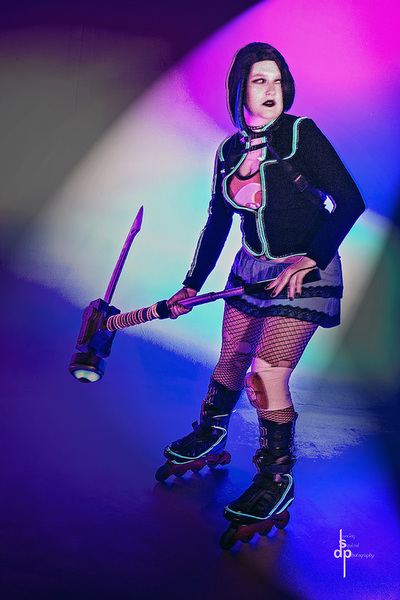 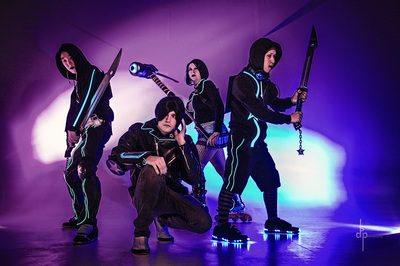 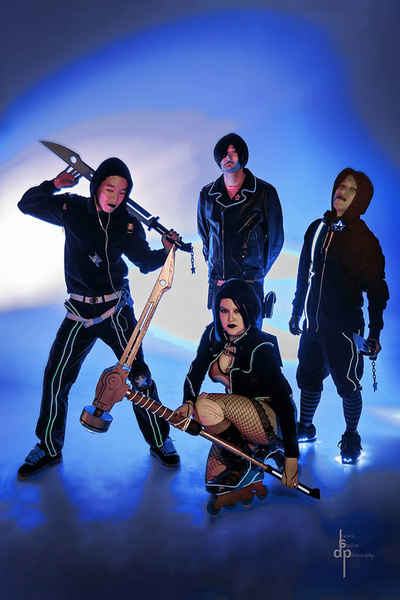 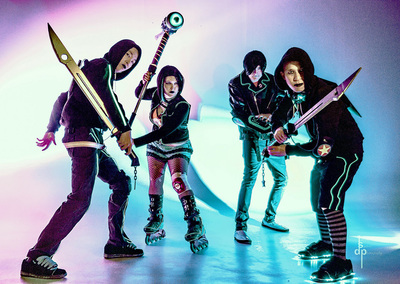 Heather: These costume had been done pretty much forever before we finally got a chance to wear them at MAGFest 2016!

Nate: See Heather's note in the Fun Shaundi section above!